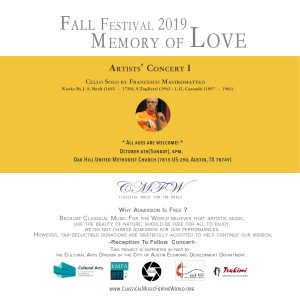 Memory of Love is a program about relationships, even though it has only one instrument, the cello, on stage. The wide range of the cello is used to interpret different personalities, and the interactions among those ideal figures are presented by the kaleidoscopic sound of such an inspiring instrument. Bach’s third suite is a joyful homage to Life and Love. Its C major key celebrates a new meaning, maybe with the devoted second wife on Johann Sebastian, Anna Magdalena, a wonderful musician

Memory of Love is a program about relationships, even though it has only one instrument, the cello, on stage. The wide range of the cello is used to interpret different personalities, and the interactions among those ideal figures are presented by the kaleidoscopic sound of such an inspiring instrument. Bach’s third suite is a joyful homage to Life and Love. Its C major key celebrates a new meaning, maybe with the devoted second wife on Johann Sebastian, Anna Magdalena, a wonderful musician in her own right. This meeting of Life and Arts, the joy of sharing each other’s soul day by day, seems to illuminate every single note and creates a true masterpiece. The journey of Cassadò suite is a love journey for the cello, for the land of Catalunia, for music, and possibly for an unknown woman. Cassadò was one of the greatest cellists of the 20th century, and this suite is homage to his land. The suite is centered with folk tunes and dances and is a virtual act of worship toward the cello. It also honors Bach whose polyphonic music composition multiplies the cello voice and seems to lead toward a secret but truly intense passion that is lived out to the fullest degree…passion for a woman? passion for music? Each of us can find his own answer. But passion for Music is surely at the very center of Stefano Taglietti Cadenza, written for Francesco Mastromatteo in 2019. This piece is the Cadenza of Gulda concerto for cello and winds, but it is also a recollection of different memories, both in Life and Art, that is used to challenge the future and establish a music which is, once again, totally new.

Described as a “virtuosic and passionate musician” by the Dallas Morning News, Italian-born cellist Francesco Mastromatteo regularly performs throughout Italy, varied European countries and the USA. He currently acts as Artistic Director for both the Associazione Amici della Musica “G. Paisiello” in Lucera, Italy, and the non-profit organization Classical Music for the World in Austin, Texas. From 2008-13, he was the Artistic Director of the Spring of Harmony Concert Series held at St. Andrew’s Presbyterian Church in Dallas. He is currently on faculty as Professor of Chamber Music at the Conservatory “U. Giordano” in Foggia, Italy – Residency of Rodi Garganico.

Dr. Mastromatteo has performed as soloist with the Meadows Symphony Orchestra, Round Rock Symphony, Balcones Community Orchestra, Orchestra Sinfonica “Città di Pescara”, Orchestra Sinfonica della Provincia di Foggia, the orchestra “Suoni del Sud”, Meadows Wind Ensemble and Starlight Symphony. He also performed J.S. Bach’s solo suites in the US and in Italy at the prestigious Ravenna Festival (2009). He maintains a busy international schedule as chamber musician and is currently the cellist of the Duo Mastromatteo. He performs frequently in duo with pianists Christina Wright-Ivanova, Andrew Wright, Michael Schneider and Viviana Lasaracina. He also has collaborated with pianist Antonio Pompa-Baldi on a CD recording of Grieg’s Cello Sonata, which can be heard on Centaur Records. He has been invited to perform solo recitals and teach master classes at such institutions as Oklahoma City University, University of Nevada Las Vegas, Southern Methodist University, Keene State College.

As an advocate for both historically informed performances and contemporary music, Dr. Mastromatteo has performed with critically-acclaimed baroque ensembles such as Concerto Italiano and Camerata Anxanum. He also has performed several world premieres, including Thomas Sleeper’s Cello Sonata, as well as works for solo cello by composers such as Stefano Taglietti, Robert J. Franck, and Kevin Hanlon. He won the first prize in the National Cello Competition “G. Turci” in Ravenna, and first prize as a duo with pianist Tommaso Cogato in the International Competition “Città di Padova”. He also served as Principal Cellist of Orchestra Sinfonica Umberto Giordano of Foggia from 2002 to 2004.

Dr. Mastromatteo completed his Doctor of Musical Arts degree in Cello Performance at the University of Texas at Austin in 2012 under the mentorship of Bion Tsang. He holds a Master of Music degree and an Artist Certificate from Southern Methodist University, where he studied with Andrés Diaz. In Italy, he worked with teachers such as A. M. Mastromatteo, M. Shirvani and L. Piovano and R. Filippini.

Following a deep passion for all arts, he also holds a Master’s Degree with Honors in Literature and History of Arts from the Università “Aldo Moro” in Bari. Published written works include a volume on Italian composer Umberto Giordano for Bastogi Editrice, and an article on Kodàly Solo Sonata for Cello, op. 8 for the International Journal of Musicology.

CONNECT WITH Classical Music for the World